Explanation for dumb peeps as meself

Hi, guys.
Just started to use the bot, actually did try it one time only.
Was reading all these topics on the bot.
Like, how to customize it, or starter guide
And I got the impression that all who use it are programmers or very clever people because I don’t really get how to do stuff with the bot.

For starters, tried to use it as is. Downloaded and opened eve etc etc. Tried venture mining and it is no being able to even warp, stuck on right clicking and trying to find asteroid belts in the menu. Actually it just clicks none stop. meh…

So… I did download it, got this cs file inside the package. What next? Can’t drag and past it into the bot last tab. I do have Visual Studio now (ye, I’m not a programmer at all, but was interested to look at it), Can open it in there. But no idea what next.

Blah, It all looks like crying))) But what I mean here, can someone write an FAQ with pictures on the issue of using other peeps custom bots and maybe something on configuring stock bot?

welcome, @viir made a guide which is in here

How To Configure A Bot Show and Tell

have you had a look on that?

For starters, tried to use it as is. Downloaded and opened eve etc etc. Tried venture mining and it is no being able to even warp, stuck on right clicking and trying to find asteroid belts in the menu. Actually it just clicks none stop. meh…

When you share the bot log, we can take a look at what the problem is in your case.

You can copy the bot log to your system’s clipboard when you are in the Bot Operation screen:

I made a video to demonstrate this:

Yes, I did.
My post should have at least 20 characters

OK, so let’s start a lesson, step by step:

the interface change to “edit script”

#!! hoorayyyyy you setted your first script!!

#!! 20 most essential; Enjoy your bot and if you want him to stop or take a pause, push CTRL+ALT keyboard buttons

Thanks for replies!!
Let me share my experience with the bot.
I did read here and in other places, obviously not with the luck.
Downloaded some stuf 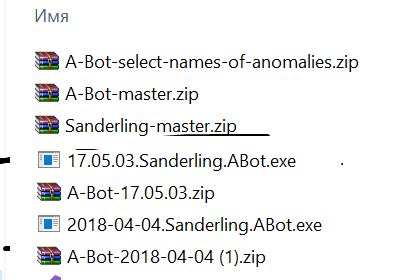 Tried to make some sence of it…
When starting exe - this is what I see: 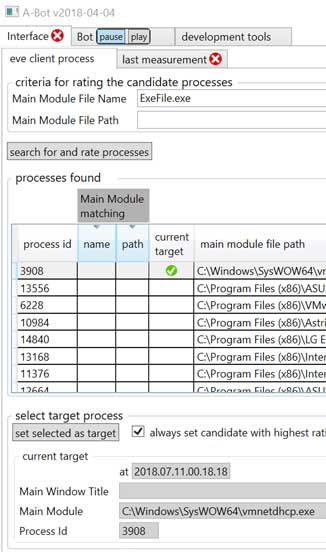 dude you are using Abot.
Those scripts you wanna use are for Sanderling

did you read well and see that? 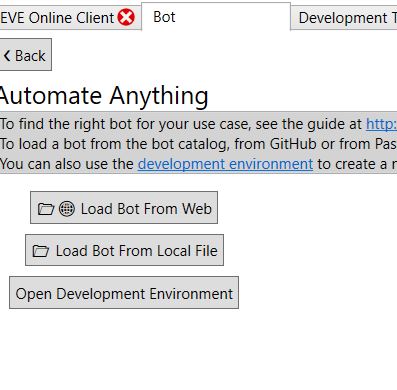 Yup… That was my problem

Thank you, guys, for answering. It did help me a lot.
I got confused with what needs to be downloaded thus was having this issue.

Did I get it right, that Sanderline is not free (demo 2 hours is)? If you get old version and config it for new memory read - chat windows yourself/or leave it be as is → that is free?

I do think than Viir did a great job developing Sanderline. And it should be rewarded. But tbh I can’t afford pay for eve, for proxy and bot. It is cheaper to by plex this way)))))

I can send Viir something from China, just as a token of appreciation or “thank you” (me leaving in China, yes)

As for A-bot. What is the status of it? The problem with the loop clicking right mouse button is in place.

P.S. I was doing 4 acc krabing in VNIs (100 AB) and the one problem that got me looking for a bot or some automation was these pesky frigs yellow boxing and not shooting, so your drones just idle and you lose ticks.

ok, let’s take things one by one:

Thank you, guys, for answering. It did help me a lot.
I got confused with what needs to be downloaded thus was having this issue.

With pleasure. Sanderling and his children are not an by the box bots, is not easy but is not complicated.

Did I get it right, that Sanderline is not free (demo 2 hours is)? If you get old version and config it for new memory read - chat windows yourself/or leave it be as is -> that is free?

I dont know if olders versions are free or not, or if you can make a 100% working free version.
Sanderling , and A-bot of course is communicate with the server; At what level… dunno.

As for A-bot. What is the status of it? The problem with the loop clicking right mouse button is in place.

to be clear:
Sanderling is the framework; you put inside a script and he follows him. Mine ore.cs, travel;cs anomaly/asteroids ratting.cs are scripts and used with sanderling.
A-bot is a more specialized bot only for anomaly ratting; He doesn’t use scripts. All modification have to be in his sources and recompiled in VS. For that, you need to learn some knowledge of coding an programming. Of course you can modify him to do more than anomally basic stuffs, but he also “talk” with the server and this one has his costs.
We can keep apreciate the work of Viir and his server by 2 ways: contributing at development or paying.
In my case, since i dont play eve like omega, but for losing some time and have some fun, i contribute at developing… at my level. I am not an programmer or coder, and is difficult to say I’m even beginner.

A-bot how it is, is just the beggining, if you want; The forum is full of pieces of coding to resolve almost 100% of basic needs for an anomaly ratting bot. At the biggining, myself I used A-bot, but in time i start to see the advantages for framework, because i have more activities in game than ratting:
ratting anomaly -my own script
ratting asteroids- my own scripts;
mining in different flavours ( ninja mining, or not) - versions adapted from samples
salvaging - an adaptation of mining script
hauling -using Terpla script for traveling
missions - I do work at a script for that
Anyway is up to you , taking an provocation to work at your bot or not; making public your work or not, to apreciate the work of Viir or not or even taking the advantage to others

Thanks again for taking the time to answer.

Now it became much clearer for me about how it all works with the bot and Sanderlin.

You really don’t have a progrmmer background and still able to write some scripts??

Can you give and example of writing process?

I mean you open Sanderlin, start eve. Where is a bunch of info on the going process. and??

just can’t wrap around next to do stuff

For me, being a self educated fool about coding, the best tipp i got for all my coding adventures (and pretty much for life itself) is to break problems down as small as possible and then try to tackle them. you will not create a bot at once but first you try to accept a mission with a script, than you look what parts of the “auto-pilot” script you can reuse, then you try to finish a mission with just a script. then you put it all together and it just feels great watching your bot do a currier mission

you dont need to be programmer, but you have to have some understandings how programs works, what conditions do, how they are used and mostly you have to have logical thinking.
you have to be able to figure out how to do what you want to do in structured way.

then you have to be able to google for partial examples in given language or learn prom others code.

its not easiest, but definitely doable.