The work you did is amazing, my mining bot works perfectly (when you configure every thing
As expected

My newbie question is the following: can I run multiple instance of Sanderling and associate each one to a running eve client?
Who the mouse click and selection will be managed?
What I’m trying to do is to use two miners bots on the same PC

To use multiple bots on the same windows instance, you can use multiple remote desktop sessions with one session for each bot.

For some editions of Windows, the default configuration only lets you use 0 or 1 such sessions.
To avoid this limitation and enable Remote Desktop Host support and concurrent(multiple) remote desktop sessions, use the following tool: 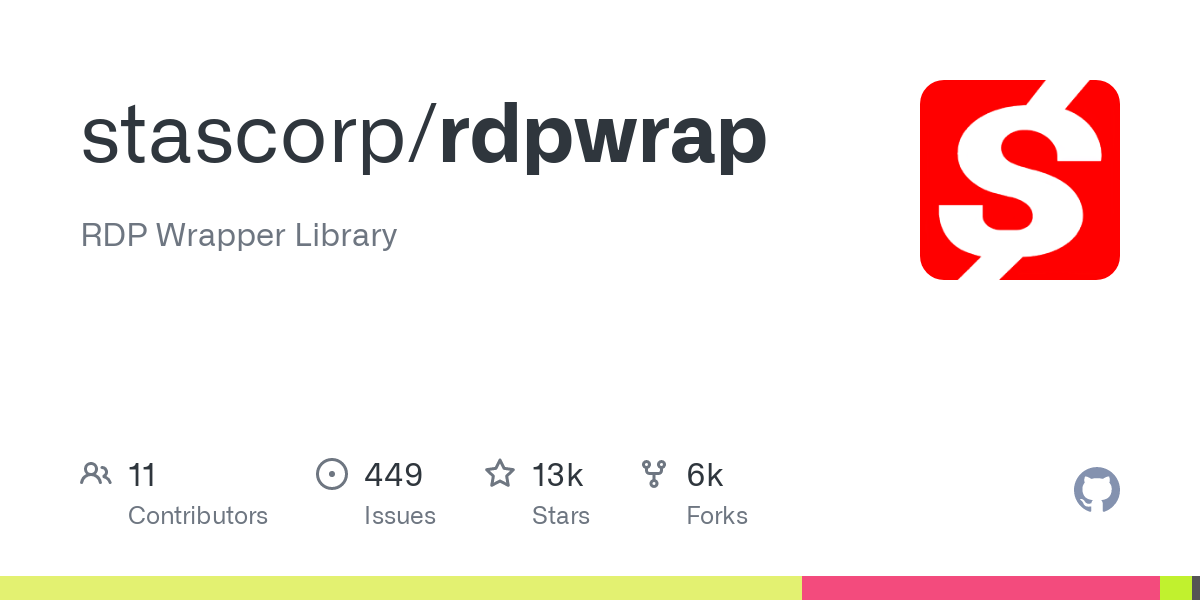 Please note that this tool might need some maintenance when windows is updated.
In case you run into issues with rdp-wrap, I recommend to check out the issues list at Issues · stascorp/rdpwrap · GitHub
There are many people over there sharing what they did to make RDP Wrapper work in their case.

Have a look at this video guide explaining how to Allow Multiple Remote Desktop Sessions in windows: 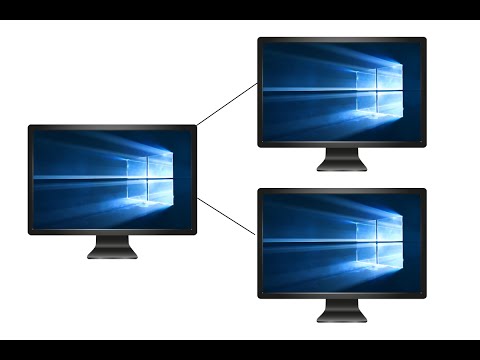 Then place one bot and game client in each of the remote desktop sessions: 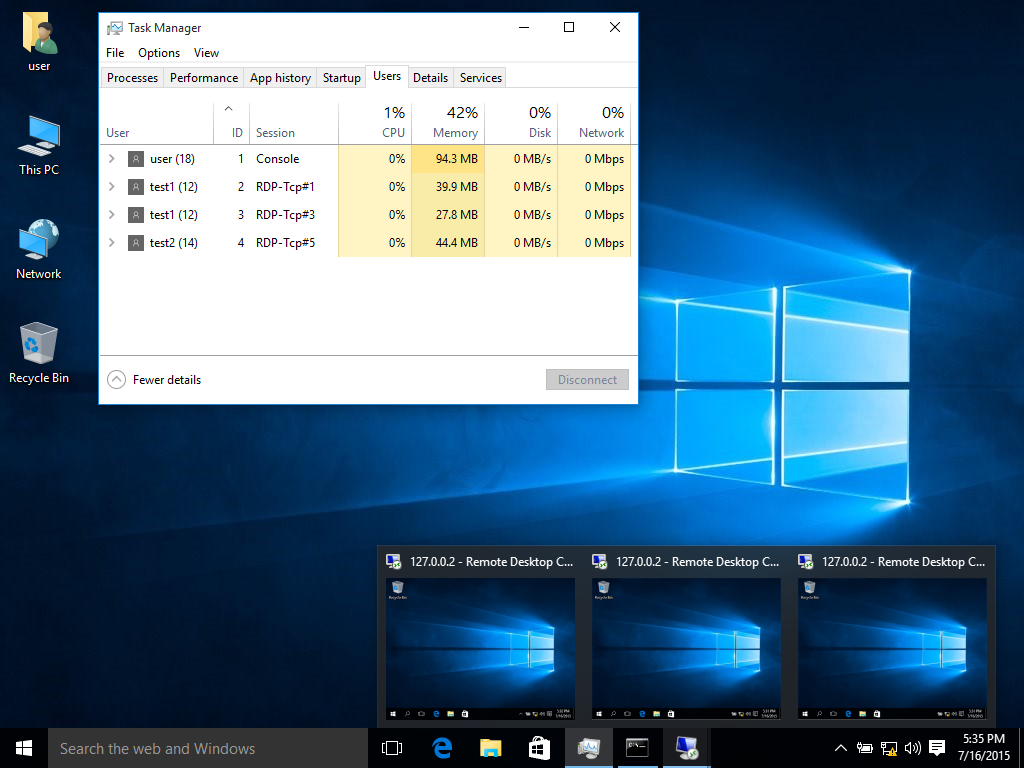 Who the mouse click and selection will be managed?

Since each desktop session has its own mouse and keyboard, no coordination is required between the bots.

can I run multiple instance of Sanderling and associate each one to a running eve client?

Yes. For each instance of Sanderling do the association as follows:

The following screenshots shows the section of the UI used here:
https://github.com/Arcitectus/Sanderling/raw/master/guide/image/Sanderling.UI.choose-target-process.png

Thanks for your detailed answer Viir.

Now I need just to test how much simultaneous sessions ( Eve Client + Sanderling ) can i run on my Pc.

I’ve attempted to do this but looks like bot doesn’t work if the remote screen is not focused.

Does this need any extra change in Eve settings or windows?

if the remote screen is not focused

The idea of focusing a remote screen is new to me.
I don’t understand how that focus could be related, and have some questions about your scenario:

By focused i mean, having the RDP opened and visible in screen. Example: 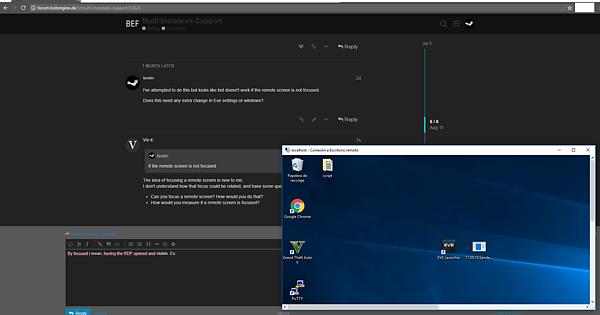 If i minimize or close the remote connection, bot at that desktop does nothing until i login and “look at him” again.

May be you should try to use virtual desktop,

in my setup I added 3 virtual desktops and in each one I have a remote desktop connexion.

If i minimize or close the remote connection, bot at that desktop does nothing until i login and “look at him” again.

Aha, I remember observing this. You can adjust windows settings to solve this. I found a description of how to enable it to also work when the remote desktop window is minimized on the following site:
https://support.smartbear.com/testcomplete/docs/testing-with/running/via-rdp/in-minimized-window.html

Following is the relevant part of the document linked above:

On your local computer, close all open Remote Desktop sessions.

Now when you minimize the Remote Desktop Connection window on your computer, this will not affect the remote computer’s GUI and the GUI will be available to your automated tests.

@BotUser i was already using w10 virtual desktops.
@Viir yes! i suspected something like this was going on. Ty!

If you have Windows 10 basic editions like Home, RDP is disabled. So if you have Pro editon or higher you can skip this steps:

Now you can run sanderling and let him do it’s job. It will work as long as you are connected and have the screen openend or minimized. Closing the connection will make Windows go GUI less mode on RDP account , so bot will fail to perform any task.

Run CMD as administrator and execute PsExec.exe -s -i regedit.exe

Why use PsExec.exe here?

It didn’t let me save those entries in registry by simply running regedit (i can’t remember the error message).
Source: Allow Non-Administrator Users to Access Windows 7 Home Premium Via Remote Desktop - Super User

Just way until they update it, as told in the repo : S

I don’t know if anyone else had problems getting this to work since the creator update, I sure as hell did!
But someone else found the solution thank god, so I will post it here if anyone else wants to do this but cannot get Remote Desktop to cooperate:

Unzip it into the C:\windows\system32 folder (if the file with the same name exists, rename it to rfxvmt.dll.old).
Do these steps with Administrator rights:

this thread is for the fucking WIN!

Just a note of warning. Unless you have a way to change the hardware names on each desktop, it will look like you are just using the same computer. So, if you intend to do heavy botting with this, you need to solve that or find a different solution.

that’s an interesting point. hrm. thanks for that.

Does this still work for people?
I’m running Win7. I have Desktops v2 running.
I have added two users to the the RDP Group and using rdpwrap I have an rdp conenction to my ip address on each desktop.
When I start eve launcher (alpha account ) in one desktop no problems.
If I then start eve launcher on the other desktop/rdp and try and log in to an omega account it says I can’t because I’m already running alpha.
The accounts are not linked on eve launcher they have separate email accounts.

Thanks for any help.