I’m not running them 8th times but I’m running my code long enough to say it’s not fault of the framework at all.

might be issue in your VM, frankly nobody really knows what VM emulates and how

@Viir is there anything that can be done for this issue? This is kind of a big issue.

From your post, I understand this issue is specific to a scenario where you use your own code. In such a case, I don’t know what you are doing.

It depends the program code you are using.
What is the smallest change in the source code from the sanderling master branch which causes the issue to appear?

I appreciate any help.
I’m trying to figure out how to save the project so that you can look at it in an IDE, but here’s the best I can do real quick. (Is there more that I can provide to help?) 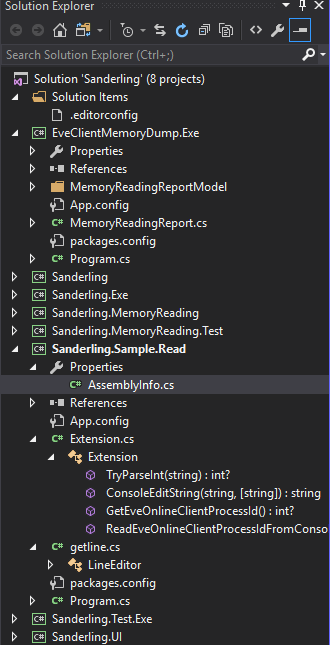 If you upload a commit to github with your changes based on that commit I can take a look at it.

I made no changes to the core code. I just used the API. When I next find it happening can I do anything to document it?

I made no changes to the core code. I just used the API. When I next find it happening can I do anything to document it?

I have to restart Sanderling.

I have also noticed this issue but only on my sanderling instance running Windows 10 on a Parallels VM. Sometimes it will take quite a while for sanderling to acquire the first valid VM measurement, then it will work fine for a while, then lose the ability to do memory measurements again. I do not see it on my bare metal window install. Just thought I would share my current experience. Not sure if it is somehow VM related, or perhaps exposed by a slower running instance.

Hmm, you just gave me an idea for what the cause could be… Dynamic or shared memory could be a reason. I’ll try them without it. Thanks!

@jyhad thank you for this. I have noticed over the last couple month my VM is getting excessively sluggish when I start sanderling to the point where the eve client becomes very unresponsive.

My VMs reboot once per day, and I don’t notice enough RAM increase to be worth investigating. (If any, it is under 10% of VM RAM.)

I understand that it can’t be read if it is closed. 3 times now I’ve found that the list in the overview isn’t found even though the overview window is open and displaying entries.

It is easy to check if the ship is in space and the overview list element isn’t being found anymore. The problem is what to do once this has happened, because the problem is persistent.

@Viir
Okay, I just caught it and I did my best to document what is going on. (For some reason my VM environment wouldn’t allow me to save a memory measurement to a file. I followed the video and dragged the text file over the File button, but the mouse icon stayed on the No image and dropping the file on the button did nothing. I even tried the latest version of Sanderling. I try to run my VMs very lean, but if you can point to something I need to enable I’ll gladly do it.) 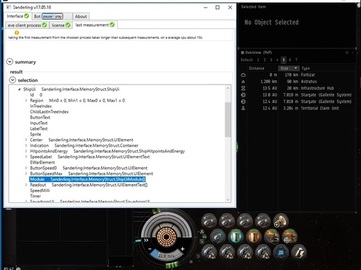 In this case, I recommend to test reproducing the problem using a process measurement of the eve online client.

With the Demo_memory_reading_from_process_sample method, you should be able to get the same Sanderling memory measurement from the saved process measurement.

Thank you. I was running the processes as admin, so that explains why the drag/drop didn’t work. I will try this next time it occurs. Thank you.

In this case, I recommend to test reproducing the problem using a process measurement of the eve online client.

Okay, found this happened again with a different UI element. Downloaded the tool and tried it but was ultimately successful because the Eve client is run as admin. Running as admin, about my 3rd admin attempt the measurement was successful, but I couldn’t drag a folder/file onto the spot because everything was run as admin, which is the same problem as before.

Is there a way to just have it create a new folder or something (even if in folder the tool is started in)?

Or can you send me an EXE or tell me the code to run to write to the folder that the application is running from?

Edit: here’s some more info. The Eve client is started by a script that is run as admin, meaning that I’m unable to run the tool from the same parent process, so even running as admin doesn’t work for drag and drop.

I found what seems like a workaround to getting a snapshot, but am busy. Will post it sometime today.

I was able to do it the way detailed in the How to collect samples for memory reading development thread. The trick is to open Notepad as admin, and File->Open within it. Within the Open window drag the file/folder. The result seems to be about 250mb, so I will upload that soon with an explanation of what is missing from the snapshot.

The trick allowed me to drop a txt file into the Sanderling Exe, as detailed in How To Save A Memory Measurement To A File, but it generated an error that I’ll send (with log) when I get home this evening.

@Viir I have sent you a PM with the example memory snapshot I was able to get, as well as the error I mentioned in the post above.

Is there a way to just have it create a new folder or something (even if in folder the tool is started in)?

I doubt this works with the current binaries. But when making a change to the source code, why not.

Or can you send me an EXE or tell me the code to run to write to the folder that the application is running from?

I don’t know of such an EXE.